With there being around 13 to 12 days left of school, the business at Beaver Local has only just begun. This week, however, is a very special one to some students. On Thursday, the 18th, selected students in grades 7-12 will be attending the 54th annual Summi Decem awards that recognize them for their academic success throughout the year. To help those who don’t know what Summi Decem is or consists of, I’ve put together a sort of Q&A to explain some key points.

What is Summi Decem and what does it mean?

Summi Decem derives from the language of Latin and the phrase “Summi Decem” means “top ten,” therefore, the Summi Decem awards ceremony spotlights the top ten students in each graduating class, starting in the seventh grade. While the phrase may mean “top ten,” depending on the number of students that make the cut, there may be more or less than ten students per class.

How does one obtain the award?

Throughout the course of the year, students who, in the case of grades 7-8, maintain straight A’s for the year are most likely to qualify, and it is based on the grades of the first three nine weeks of the school year. In the high school level, though, students have to hold a GPA (grade point average) of a 3.9 or higher to qualify. While it may be based on first semester grades, it is cumulative, meaning that it can be based on the grades of the first semester plus grades of the second semester of the previous school year.

What does one receive at the awards ceremony?

Students in grade 7-10 receive a simple red and white certificate signed by their principle and the Beaver Local Education Association representative for that year. Students in grades 11-12, on the other hand, are presented with a placard, congratulating them on their achievement. Those who have been a full six-year member, however, have a red plate on their placard compared to the black plate of the rest of their graduating class. 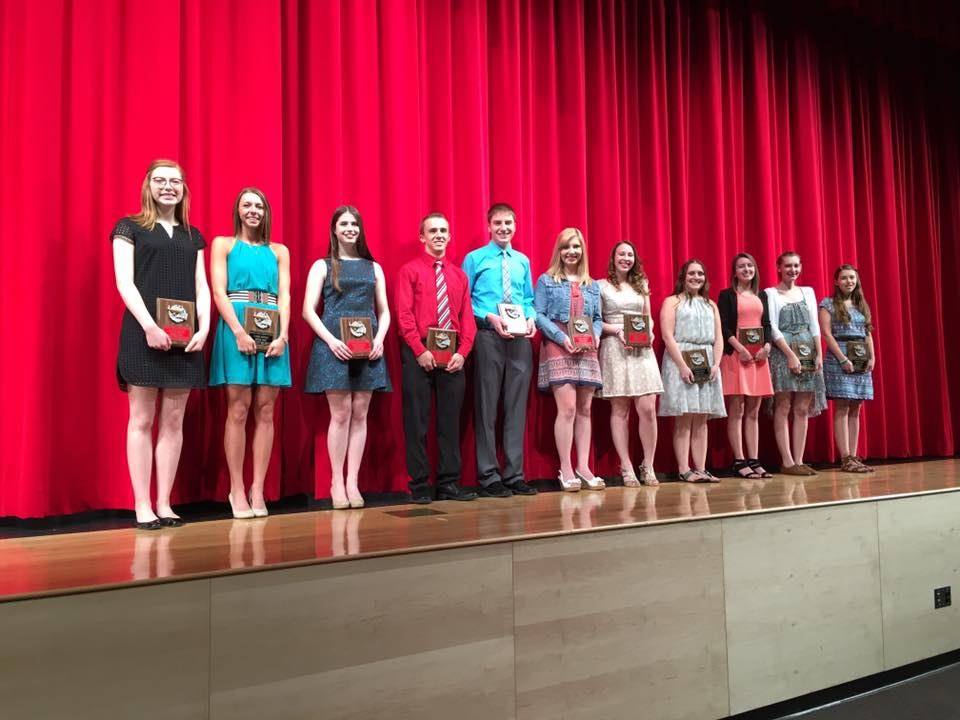 How important is it to get Summi Decem each year?

While it may be rewarding to be recognized for all the hard work you put in to achieve this award, don’t fret if you don’t get it another year or ever again. You’ll be surprised at how many colleges and employers who actually do not know what Summi Decem is, therefore you won’t be getting any scholarships for it anytime soon.

As a student who is now a three-year member, I can say that it is very rewarding to be recognized and awarded for the hard work and dedication it takes to maintain such a high GPA. Looking back and remembering about the fits I threw because I didn’t want to go to my sister’s Summi Decem awards (as she was a six year member), because I thought it was pointless, but now I can say that it is actually worth going to as you get to watch your fellow classmates with smiles on their faces while they receive their award, knowing that somehow you all made it through the year with the GPA’s that you did.
Congratulations to all the 2016-2017 Summi Decem members! Here’s to a great end of the year and hopefully another Summi Decem to come next year. 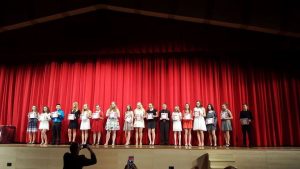 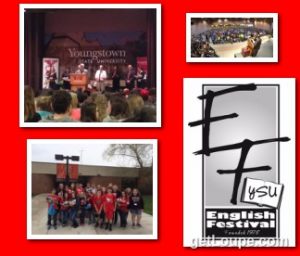 Next week, the week of the 24-29, students in both the middle and high school levels will be participating in the 39th annual Youngstown State University English Festival. Students from schools in Mahoning, Trumbull, and Columbiana counties in Ohio, and Mercer and Lawrence counties in Pennsylvania, along with a few teacher chaperones, make the trip to YSU for this unique event. This year, the festival is held on Wednesday, April 26 for 10-12th grades and Thursday, April 27 for 7-9th grades. Each year, the Beaver Local School District takes a maximum of 30 students to the festival.

Even though the festival is not until the end of April, students participating still have a lot of work to do. Before anyone can take part, each grade level has a certain number of books that need to be read as well as quizzes that need to be taken. All books and their quizzes need to be completed two weeks prior to the festival. A week before the festival, a meeting will be held for all students going to YSU to pick up a map of the campus and their track letter, or schedule. Each “track” is designed to fulfill a student’s experience at the festival and, hopefully, be enjoyable for that student.

While each student’s schedule may be different, they are the same in some ways. All students begin the day together in Kilcawley Center for the “Welcome” speech. At about 11:30, students head to lunch and have around an hour to eat, socialize, or go to the bookstore. When the day is coming to an end, students meet back up with the rest of their classmates and chaperones for an awards ceremony in Kilcawley Center.

Awards that are given at the end of the day include not only those that are given for the activities students took part in that day but for the pre-festival activities. Pre-festival activities consist of the Candace Gay Memorial Essay Contest, English Festival Art Contest, and the Jeremy Salvner Memorial Music Contest. These pre-festival activities are not just contests, either. Each year, YSU invites guest speakers to talk to the students. This year’s speakers are authors E. Lockhart and Gene Luen Yang.
While English Festival may seem like a lot of work and boring, when you meet up with other schools on your designated day it is actually really fun and interesting. Not only do you get to compete for prizes and show off your writing skills, you get to meet new people and make new friends. Like my old English teacher used to say, don’t be afraid to make a fool of yourself because there’s a 99% chance that you will never see those people again. 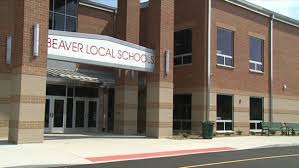 In a recent news article in a local paper, they talk about budget cuts and how those cuts will cause two staff members at Beaver Local to lose their position. With the chance of losing almost $500,000, the two staff positions to be riffed are an executive secretary and an eighth-grade teaching position which were approved by the Board of Education on Monday, March 13. These two staff positions will be eliminated at the end of the current school year.

While the elimination of these positions may not personally affect me, the cuts will surely affect other staff members and other students. Although the school has already eliminated two positions, there will also have to be other cuts throughout the district to come up with the $500,000. Not knowing why the district is losing so much money, the District Treasurer, Stacy Williams, will be attending a meeting in Columbus to voice her displeasure in the loss. The main reason for the cut is believed to be enrollment, at which has gone down significantly over the past five years. This means that either A, graduating classes are getting smaller, B, parents are not enrolling their kids at Beaver Local, or C, students are transferring to other schools.

Further along the line, if enrollment continues to drop, then more money may be lost. If that is to happen, then there can possibly be even more budget cuts made throughout the district. Even if the school was to gain any money in the future, the amount would still be fairly small, most likely along the lines of $18,000. 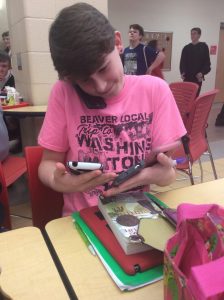 The usage of cellphones in schools has been an ongoing debate now for a couple years, but over the years, teachers and administrators seem to have more tolerance for the mobile devices as cell phone policies have changed. In the Beaver Local School District, cell phone policies changed when the new facility began it’s operation and the use of iPads became more prominent. The reasoning behind the change in policy was that since iPads would be in use during classes and most likely lunches, it would be too hard to prevent students from using their phones by hiding them behind the school distributed devices.

In the high school handbook, it states that students are allowed to use their phones during lunch, between classes, or if they are instructed by a teacher to do so with no voice calls being allowed. If the students fail to comply with these rules, the phone may be confiscated, and depending on the number of offence, can be picked up at the end of the day either with the teacher or in the office with a parent. In the middle school, students are allowed to have their phones during lunch and before and after school, with further rules being announced by the teachers that the students have. If a phone is to be confiscated and the student refuses to hand their phone over, they can get internal or external suspension. Further infractions afterwards may result in internal suspension or removal from the public wireless connection. High school vice principal, Jim Ricardo, believes that the greatest problem with cell usage is that students rely on them too much and use the mobile devices too much. Mr. Ricardo added that he would like to see face to face interaction more than seeing students have their heads down staring at a screen.
With the more lenient policy, teachers have had to find ways to stop their students from using phones during class. The main way that teachers stop students from using their phones during class is by having pockets hanging on a wall in the back of the classroom. Students can put their phones in the back of the room in an assigned number, and can even win bonus points for that class depending on the teacher and the day. This method seems to work best, especially when the offer of extra credit is put in place. Other teachers allow students to have their phones on their desks, but upside down so the screen is not facing the student so they can not be tempted. Along with the screen facing down, the volume needs to be turned off so other students do not get distracted from their work if the phone were to go off. With this course of action, it is not as effective as having students put their phones somewhere in the classroom as they still have the devices in their possession, meaning they could still pick it up and use it.

Then there are teachers who do absolutely nothing about the problem. In classes where there are no strict rules about cell phone usage other than “don’t use them,” students can be seen on their phones. Those students are told to put their phone away multiple times, and they do until the teacher stops looking at them. Usually after being asked a couple times to put their phone away, the teacher will confiscate it and give it back at the end of class. If students are having their phone confiscated various times, then something needs to be done in that class. The most effective way that works best is, again, having students place their phones somewhere in the classroom so they don’t get distracted and can focus more on their education than what is going on in their virtual lives.